The Smiling Girl, the Serious Boy, and the Teaching Machine

This is Susan Burdorf, age 5. Her smiling face appears in numerous articles about teaching machines in the early 1960s. 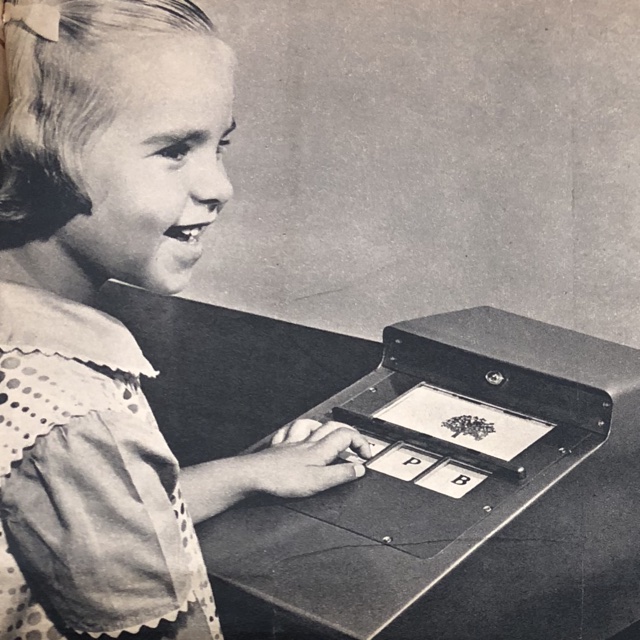 Often, her name isn’t given in the captions. The kind of machine she’s using isn’t often described either. As such, she’s just a very enthusiastic little girl, pressing on the window of the letter she associates with the picture above it. As she’s right – T for tree – the machine will then display the next item to be matched.

There’s another frequently-used photograph: one of Eric Newhall, age 8. His name is often not given either; nor is the type of machine he’s using. Eric works alone, much more seriously and earnestly than the gleeful Susan – but surely just as posed. (I am particularly fond of what is written on the blackboard behind him: “teacher.” 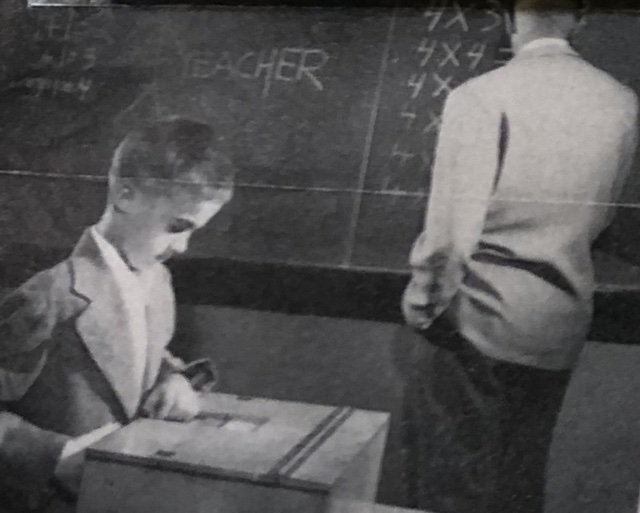 A student at the Agassiz School in Cambridge, MA according to one caption, Eric seems to have sat for a number of photos. Eric at his desk. Eric on the floor. In all these, he’s using one of the earliest machines designed by B. F. Skinner, still a wooden box. The earliest newspaper article I’ve found using Eric’s image is 1954 – several years before Skinner struck a deal with Rheem Manufacturing to develop and sell a plastic version of his teaching machine. 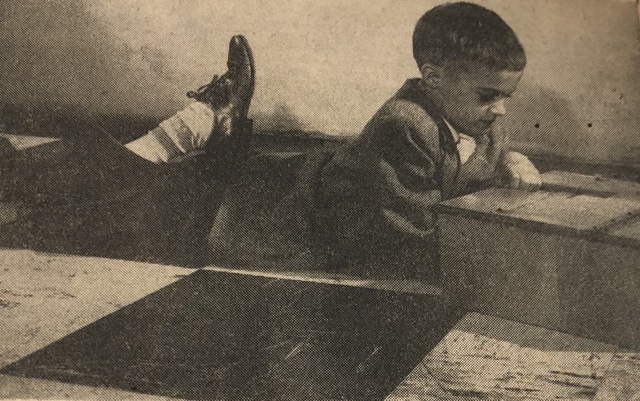 Susan Burdorf is pictured with one of Rheem’s machines. (I think.) And I’m guessing that Susan is related to one Donald Burdorf, an engineer worked for Rheem. Skinner and Burdorf communicated regularly – although there’s no mention in any of their letters of Susan.

For as often as the histories of teaching machines have been written, I find there is still so much untold about these devices – about their design, their marketing, their usage; about the people involved who were not named Skinner or Pressey. I want to make sure that my book doesn’t fall into this trap: a story of what “great men” have built that ignores all the other factors that contributed to (and undermined, even) their inventions.

This is a challenge as I am, indeed, writing about these very men. But I want to underscore that the development of teaching machines was much more complicated than the oft-told story that gives narrative agency only to a handful of psychology professors or to the technology they imagined. That means thinking, if nothing else, about how commercialization worked (and didn’t work) – how and why, for example, certain photographs were taken with certain children and used to promote a certain image of this new educational experience: the experience of being taught by a machine.

For more updates as I research and write Teaching Machines, subscribe to this site's RSS feed.